WDPE LPFM “DNP 102.3” is a low power FM station in my childhood hometown of Dover, Ohio, so I had an interest in seeing this station come to fruition. It is owned by a non-profit 501c3 organization, Dover – New Philadelphia Educational Broadcasting, and is independent of other non-profit organizations and public school systems in the area.

This station provides an opportunity for many in the community to enjoy being a part of radio (as I have been) and the station’s mission is to act as “the voice for all the non-profits in the area”. With a mission of education and supporting organizations like hospice, Big Brothers/Big Sisters, United Way, local libraries, educational services and even the city governments, the station will play an important role within the community.

Like most LPFM’s, funds were tight for the build, but the station’s board was determined to purchase “the right gear” to last many years and provide a realistic experience for the educational aspect of the station.

“The Nautel AUI is unmatched and the little Optimod 5500 inside the VS300LP actually IS a processor that is extremely competitive.

It wasn’t long before listeners were commenting on not only the incredible reception of our 100 watt ERP station, but the phenomenal audio quality.”– Dan Slentz, CE

Very “real” broadcast equipment like AudioArts console (Air4), Inovonics 531N modulation monitor, DASDEC EAS, Stanton CD’s, and BSI Simian automation were chosen for their reliability, feature sets, and value for the money. The same had to be true of the transmitter.

There are places where a station can “go cheap” and listeners may not be aware (like CD players), but there are other places where the reliability is absolutely critical and no corners should be cut. When it came to the antenna (due to the cost and nature of repairs) and the transmitter, I placed the highest value in selecting the right equipment.

There are a number of good LPFM transmitters available, some with nice feature sets, but I wanted some particular features that I could only find in the Nautel VS300LP.

I’ve been in broadcast engineering since the 1980’s with my first real venture into “broadcasting” at the age of about nine years old with a Knight Kit tube type amplifier which managed to “transmit” on about a half dozen frequencies on the AM dial!

My first experience with Nautel came with their 5 kW solid-state AM transmitter at 56 KLZ in Denver back in 1990 (right after getting out of the Air Force and working for Armed Forces Radio & TV). Though I was a complete novice with AM transmitters, the Nautel was easy to maintain and the techs at Nautel were incredible at helping me. Throughout my career, I’ve seen many of the major players and a few surprise names (like Singer) on transmitters.

After a LOT of careful research, I decided to purchase the Nautel VS300LP. There were a couple of others under consideration, but after weighing features and reflecting on my own experience, I went with the VS300LP.

My tipping points included the fact that it had a familiar name in processors included at no-charge (at the time), a static RDS, and a GUI (Nautel’s Advanced User Interface or AUI) that exceeded anything else available in the price range. In fact, the AUI in the VS300LP is the same as that found in their high power FM’s. Being able to glance at a spectrum analyzer and have deep hooks into the transmitter’s inner-workings were features I could appreciate. 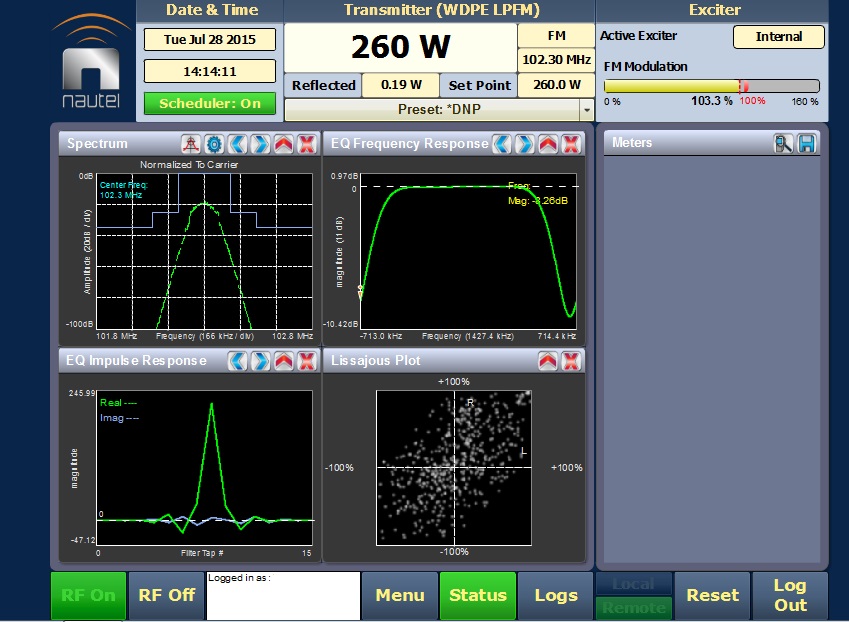 Regarding the processor, I had some trepidation towards an internal version due to what I felt might be a lack of quality and advanced control, and considered an alternative manufacturer for an outboard version. Although I had Optimod experience, I was unfamiliar with the Optimod 5500 (which is the optional processor in the VS300LP). But financial limitations for the LPFM and this particular deal meant that DNP 102.3 would need to go with the free internal Optimod 5500.

The VS300LP shipped with everything I needed for the install; from the ferrite chokes to the rack kit. Unfortunately my rack depth was insufficient to use the beautiful sliding rack that comes with the transmitter, so I went with front/rear supports and racked it that way.

The only thing I needed to complete the install was the correct plug for our 220v receptacle, so after following the grounding recommendations and attaching the antenna Heliax, I configured the transmitter and began program tests.

The Nautel AUI for the Optimod 5500 is extremely versatile and the initial presets provided a great starting point. With the built-in spectrum analyzer and the outboard Inovonics 531N, I compared the VS300LP to two local full-power FM’s and much larger group-owned FM’s coming from nearby Canton, Ohio. This little LPFM sounded incredible!! It jumped out of the dial as loud or nearly as loud as any of its “full-powered commercial siblings!”

As someone who has been in radio since 1980 (at the local commercial AM/FM combo in the very same market just 35 years earlier), and having some good major-market experience as a jock (Cleveland/Akron/Canton, Columbus OH, Denver, and even Madrid/Torrejon, Spain), I feel fairly qualified as a judge of quality.

As an engineer, I absolutely do my best to ensure my stations are fully compliant with FCC regulations. Using the dynamic RDS, I allowed the station to peak (no more than 105%). In comparison to some other stations that could be received, it appeared not everyone felt the same about maintaining similar modulation. With two very knowledgeable “music friends” (musicians/studio engineers), I made very minor modifications to processing; a little at a time, tweaking in a little more on the lows and the highs. It wasn’t long before listeners were commenting on not only the incredible reception of our 100 watt ERP station, but the phenomenal audio quality. And as we all know, the audio quality is a combination of everything from source material to signal path, processor, AND “coloring” of the exciter/transmitter.

The Nautel AUI is unmatched and the little Optimod 5500 inside the VS300LP actually IS a processor that is extremely competitive (which was a very pleasant surprise to me).

In the interest of a balanced review, I question the location of the filter/air intake on the side of the transmitter, even though this is a “non-issue” at DNP given that our transmitter rack has no side panels so it’s easier to get to air access/egress and confirm the clean air flow. Also, if used with the proper Nautel-supplied sliding rack I wonder if the antenna cable, grounding strap, audio lines, and especially the heliax are forgiving enough for regular movement.

[Editor’s note: We appreciate Dan’s comments. If anyone has concerns at any point in the process of selecting, installing or commissioning a Nautel transmitter, we invite them to contact us to discuss those concerns. We also invite our readers to review our Physical Considerations When Buying a Transmitter white paper which addresses air flow and cooling considerations amongst other physical attributes of transmitter design.]

“I can say that in reflecting back on this transmitter choice, its cost and features, I’m extremely happy with the Nautel VS300LP and would certainly make the same decision again.”

Dan Slentz has been in broadcasting since the age of 14. He assists LPFM’s and does freelance engineering.