Nautel designs extreme reliability and redundancy into all Nautel transmitters to help ensure that broadcasters stay on air. However, for facilities that broadcast multiple programs from a single site, N+1 capability provides even higher levels of redundancy that is automated and cost effective. Nautel N+1 configurations support up to six identical main transmitters plus a backup transmitter serving outputs of 300 watts to 40 kilowatts of solid-state power.

In this example four Nautel NV series FM broadcast transmitters (A through D) plus one backup transmitter are configured with a series of coaxial switches that are part of a 4+1 switch matrix, RDS and audio program switchers, and a Nautel system controller. 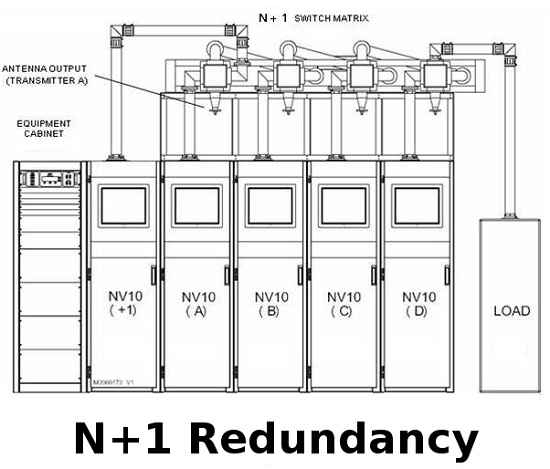 The Nautel SC1 System Controller provides system control and monitoring functions for up to six NV-series FM broadcast transmitters connected in an N+1 configuration. When the SCI recognizes a fault condition that has inhibited output power of any of the 4 NV transmitters, the SCI inhibits the faulty transmitter and transfers it to a dummy load. The audio, SCA (if applicable) and RF are all switched to the +1 transmitter which begins broadcasting the faulty transmitter’s channel.