In an era when most operators are reluctant to spend even very modest sums maintaining AM broadcast facilities, a southern Caribbean Island medium-wave broadcaster has “gone for the gold,” rebuilding its transmission facility and boosting power nearly five-fold from 100 kW to 440 kW.

The rebuild was more of a “second coming” for the 800 kHz facility, located in Bonaire, an island that is part of The Netherlands, situated about 100 miles off the Venezuelan coast. The station is owned and operated by Trans World Radio, one of the world’s largest evangelical media organizations.

According to Lauren Libby, TWR’s president and CEO, the station went on the air in 1963 at the 500,000-Watt level, but costs associated with operating and maintaining a high-power tube-type rig eventually forced a cutback to 100 kW in 1998.

He explained that the decision to boost the station’s power to near its original level was made a few years ago when the need was recognized for a large regional station in Latin America to supplement the small FM operations on the air in that region.

“We also had a lot of people in Cuba asking us if we could increase the power to cover the island with Christian programming,” said Libby. “One of the primary motivations was to bring hope and encouragement to Cuba, Venezuela [and] to the whole Latin American region — even down into Brazil — to provide quality Christian programming. Its purpose is basically to encourage people, and to give hope in a world where hope is a pretty precious commodity. That’s why we increased the power.”

“This was almost a $4 million project and it began about four years ago,” said Libby. “We had supporters from the U.S., Europe and Latin America. Actually, about 10 percent of the donations came from Latin America, which is remarkable when you look at the economy in many of these countries.

“I had people tell me that we would never accomplish it; it will never happen. But it did happen. It’s an amazing story — literally almost one miracle right after another.”

Libby noted that the power boost would not likely have been possible without the advances that have been made in broadcast technology, though, citing the greater than 90 percent efficiency of the Nautel solid-state transmitter selected for the project, and also the ability to operate with a much smaller staff.

In addition to Nautel, Libby lauded the efforts of Tom King and Kintronic Labs in achieving the upgrade. “Kintronics did a superb job of creating the antenna solution,” he said.

Preparing for the Power Boost

King said the project was done in phases as funding became available.

“It started with the construction of new tuning houses at the tower bases, and they also had to prepare a room in the transmitter building where the old transmitter had been,” he said. “We started work on the RF system in early 2017, and this was shipped and installed and they went on the air with it in July, using their existing 100 kW transmitter.”

The next step was the ordering of the Nautel transmitter, which occurred in spring of 2017. Delivery took place in December, with installation following in the transmitter building space vacated by the removal of the tube-type big rig. 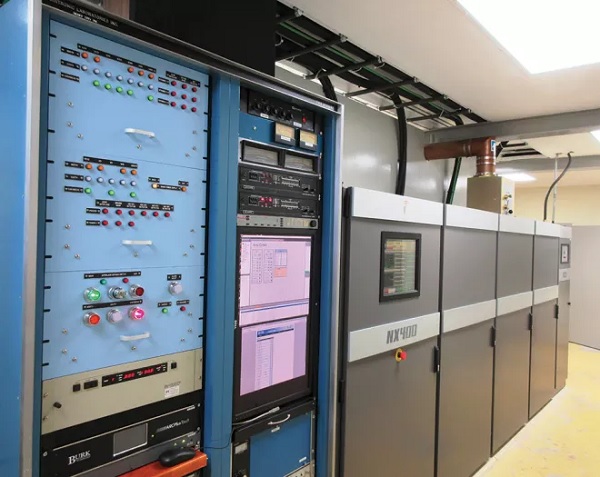 “I went down to the island with my youngest son in January to do final pattern adjustments,” said King. “They went to full-power operations and had a dedication ceremony on the 30th of January.”

“In 1999, we implemented a totally new antenna array for them,” King said. “It consisted of four 450-foot towers in a ‘box’ configuration, with the long side of the array going east-west to produce a broadside pattern going north and south. They also have a separate ‘Caribbean’ pattern with one tower driven and the others acting as parasitic elements.”

Hands-down, at its current power level approaching half a million Watts the facility is now the most powerful medium-wave outlet in the Western Hemisphere.

“The NX400 is rated at 400 kW,” said Lonergan. “However, all of our transmitters have a 10 percent overhead, and TWR decided to go with this model. Otherwise, they would have had to purchase two units and combine them, which would be considerably more expensive. This is a group that runs on donations and they have to have a critical eye as to operating costs. With a transmitter that’s more than 90 percent efficient and running MDCL (modulation-dependent carrier level), this filled the bill and they’re very happy with it.”

Even so, the TWR Bonaire station is the island electric utility’s single biggest customer.

“We used to have our own diesel generators when we were running both the 500,000 Watt medium-wave transmitter, as well as operating shortwave transmitters,” said Libby, explaining that the station’s power plant had been taken out of service several years ago after the tube-type rig was retired and shortwave broadcasting from the island ceased.

“We are now looking at putting in a standby generator,” he remarked.

“We did it ourselves”

One of the more unusual aspects of the transmitter installation is that the station’s operators, assisted by volunteers, did the work themselves.

“This is a bit unusual for a transmitter of this size,” said Nautel’s Lonergan. “However, they had witnessed the NX100 100 kW transmitter installation and had come [to Nautel’s facility] for training on the NX400. I was at the site later and it was a ‘world class’ installation.”

Lonergan said the only real glitch encountered in the project was in getting the transmitter to the site in time for the planned dedication. “Bonaire is not exactly the shipping center of the universe. We had to put our logistics people into overdrive to make the promised delivery date on time, but they did it.”

The NX400 transmitter comprises a power supply cabinet weighing upwards of 5,000 pounds, along with four other units with combined weights of 5,200 pounds. The transmitter was shipped in eight crates from Nautel’s Nova Scotia, Canada facility to Bonaire in a single freight container.

Not Just for Spreading the Gospel

TWR’s Libby said enhanced power and coverage not only help spread Christian programming to a wide area but are useful in other ways.

“When you get into an emergency situation, there’s nothing that beats medium-wave,” he said. “For instance, when the hurricanes came across the Upper Antilles we were on the air every night with weather, encouraging [those affected] and talking to people throughout the region live on the air. The Netherland Antilles government says whenever there’s a disaster, just tune to 800 AM because that’s where you can get information. That was one of the reasons that we did what we did [with respect to the power increase] — to allow the Dutch government to be able to talk to the Caribbean all the way from Saba to Aruba. You need this kind of power in the daytime if you’re going to do that.”

Trans World Radio is one of the largest media organizations in the world, based on the number of countries its signals reach and the number of languages broadcast on a daily basis. Libby noted that they broadcast to 190 countries in more than 230 languages every day, and overall coverage and language support exceed that of the BBC World Service and the Voice of America.