When AM stations are told they can save a considerable amount of money on their monthly electric bill, general managers pay attention. And, when a transmitter manufacturer such as Nautel backs up this statement by showing potential savings of tens of thousands of dollars per year, it’s enough for GMs and engineers to really sit up and take notice.
A major part of achieving considerable power savings is the implementation of MDCL, or Modulation-Dependent Carrier Level, technology in the transmitter.

MDCL, also known as DCC or Dynamic Carrier Control, is not a new concept – it’s been used for decades by high-power Medium Wave broadcasters around the world. However, its usage in the USA has only been allowed since 2011 and had, until recently, been hampered by the need to apply for either an experimental license or a waiver with the FCC. In early 2016 this changed when the FCC issued a statement allowing stations to implement MDCL without prior authorization. (Now, you simply notify the FCC of your MDCL operation within 10 days of the start date.) Following this rule change, more than 50 AM stations notified the FCC of MDCL operation in 2016, and the number has continued to grow over the past two years. 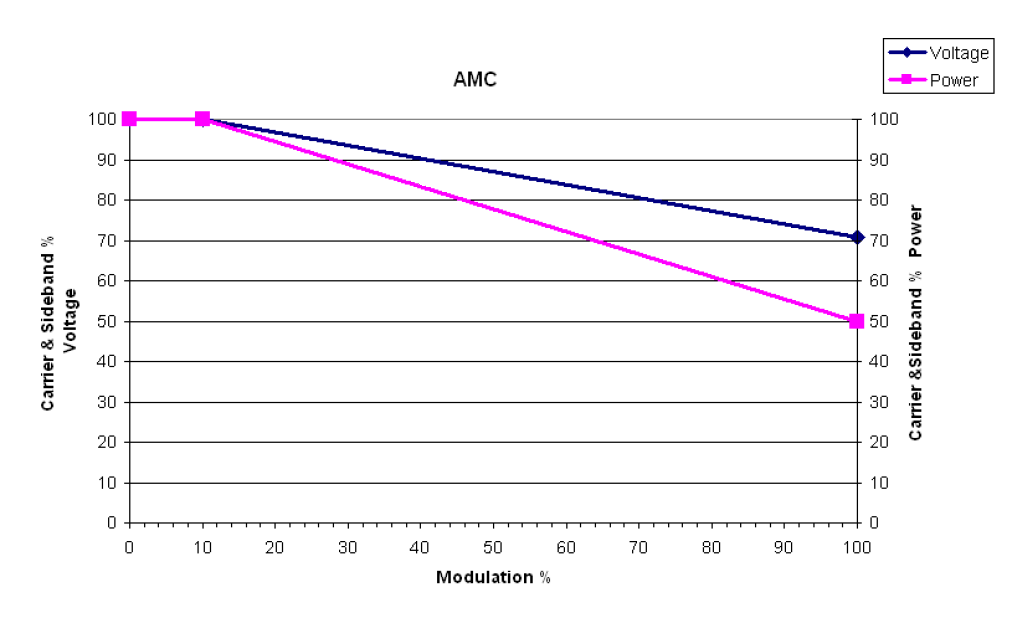 Gain characteristic of AMC with a typical maximum reduction setting of 3 dB.

Other algorithms are available but they are basically different implementations of these two systems. AMC, developed by the BBC, seems to be the preferred mode because changes in the coverage area are usually negligible. The BBC has conducted extensive testing of its companding method and has found that any increase in background noise, such as that experienced at the edge of the transmitter’s coverage area, is usually masked by the higher modulation. Also, a receiver’s AGC will compensate for the changes in signal level and will maintain the loudness of the received audio.

Nautel has provided MDCL algorithms in its transmitters since 2011, and other transmitter manufacturers also include them. Multiple algorithms are available in Nautel transmitters, allowing stations to select the mode that makes the most sense for a station’s operation (stations running a talk format may benefit from one type of MDCL while those playing music would opt for another; although all carrier control options will provide significant power savings, Nautel recommends AMC). Enabling MDCL on a Nautel NX Series transmitter takes less than a minute. 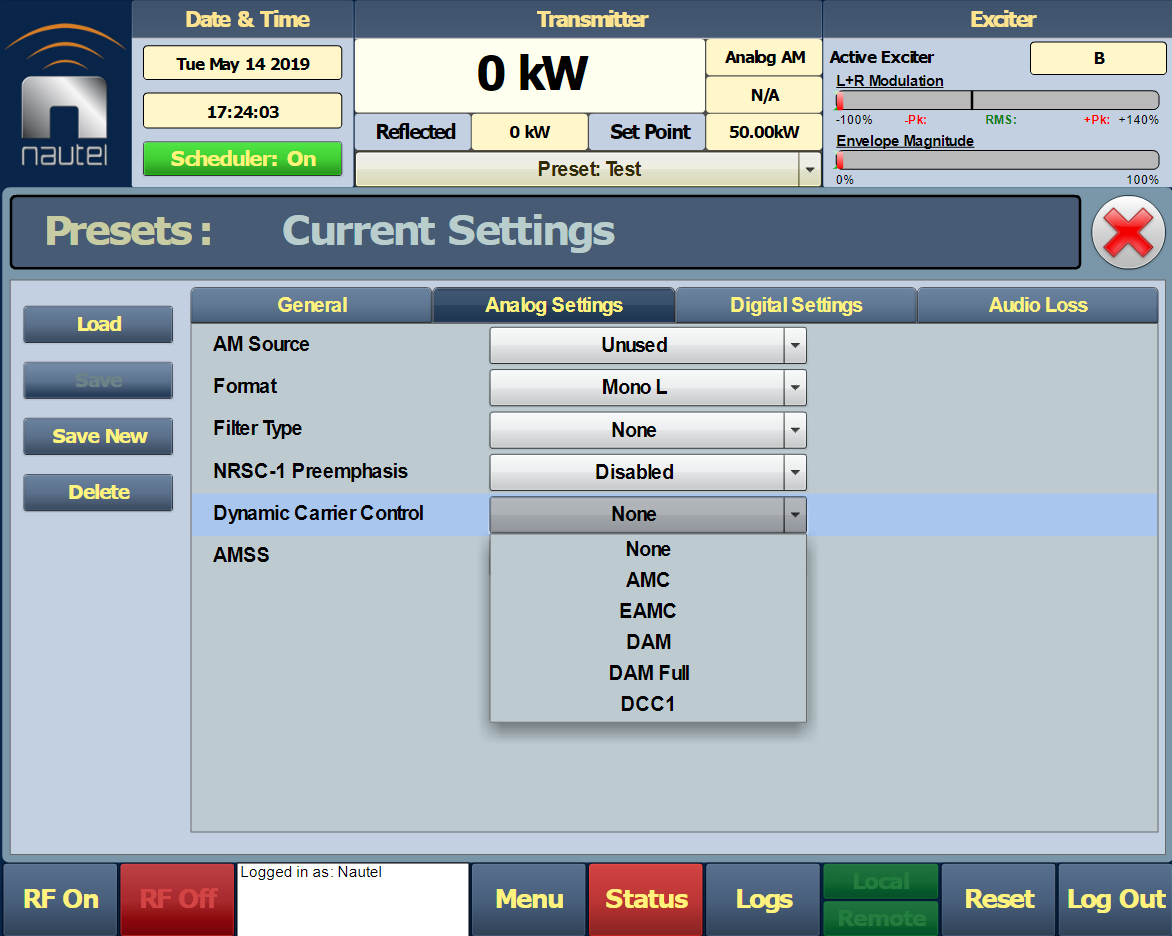 The real-world results of MDCL implementation are interesting.

“We had been running our Nautel NX50 in Calgary for close to 14 months before I realized we had the MDCL feature built-in,” says Marco Auriti of Touch Canada. “It took a while to get permission from the Canadian government to implement MDCL . After multiple requests, we finally were told to simply provide a letter saying MDCL was in use. After running it for several months, I compared our invoices from the power company and found that our Calgary operation was using almost 37% less power than before. We saved $9,500 in one year.”

Touch Canada utilizes the AMC mode with 3dB compression. “Although you can push MDCL to 6dB compression, you may lose some of your coverage area,” Auriti notes. “We have a large coverage area for our stations – we can hear Calgary all the way to Edmonton, about 300 km away, and vice versa. With 3dB, there’s no change in our coverage and we’re saving money on power. Our results were so good in Calgary, we purchased a modification for our old XL Series Nautel transmitter in Edmonton and implemented MDCL there as well.”

In the USA, Crawford Broadcasting is running MDCL at six of its AM stations. Five of the six stations operate at 50 kW. “The cost savings are both direct and indirect,” says Cris Alexander, Crawford’s Director of Engineering. “We see a reduction in kWh consumption for the transmitter itself, and a smaller reduction in consumption by HVAC systems as a result of the reduced heat load. We also see a significant decrease in the electrical demand, which is often one of the biggest components of utility billing. For example, the most recent (April) electric utility billing for 50 kW KLTT in Denver shows a peak billing demand of 54.12 kW. That is amazingly low for a 50 kW station – a more typical value for a non-MDCL 50 kW station would be 85 kW — and speaks not only to the direct/indirect power savings from MDCL but to the overall efficiency of the transmitter itself. Demand in that market is billed at 17.5 cents per kWh, so the savings really add up.”

Alexander notes that power savings via MDCL are most evident with high power operations and don’t make as much difference with smaller stations. “One station running MDCL, WYDE in Birmingham, is only 5 kW. Our use of MDCL there is primarily for other reasons than power savings. That station has some challenges with its downtown antenna system. We find that MDCL operation reduces stress voltages on the antenna skirt and tuning components, leading to fewer failures, better overall reliability and reduced RF interference to nearby electronic devices.” At other Crawford Broadcasting 5 kW stations, Alexander says the power savings were lost in other fixed power uses at the site such as tower lights, HVAC and other devices, and they opted to turn off MDCL at those stations.

“A broadcaster who wants to retain existing coverage while saving money on power can use substantial amounts of dynamic carrier control. Using a processor such as the Orban XPN-AM gives the station the ability to increase the average power in the sidebands and to make the most of that power via improved distortion masking and increased speech intelligibility. In essence, a station then requires lower carrier power to provide the same coverage (with improved speech intelligibility), while the dynamic carrier control increases carrier power to minimize noise at the receiver during quieter parts of the program, including normal pauses in speech.”

Orban notes that using processing such as that in the XPN-AM can actually increase the power bill on small stations, especially when no dynamic carrier reduction is used, but “it also can make the best use of every last licensed watt of carrier power, so it is a particularly attractive option for those with licensed power levels below 5 kW.”

Curious how much you can save with MDCL? Nautel has posted an AM Power Savings calculator on its website which allows you to calculate potential savings based on your current transmitter’s power, efficiency, modulation density and power costs for your area. The calculator can be found at nautel.com/am-mdcl-savings/. 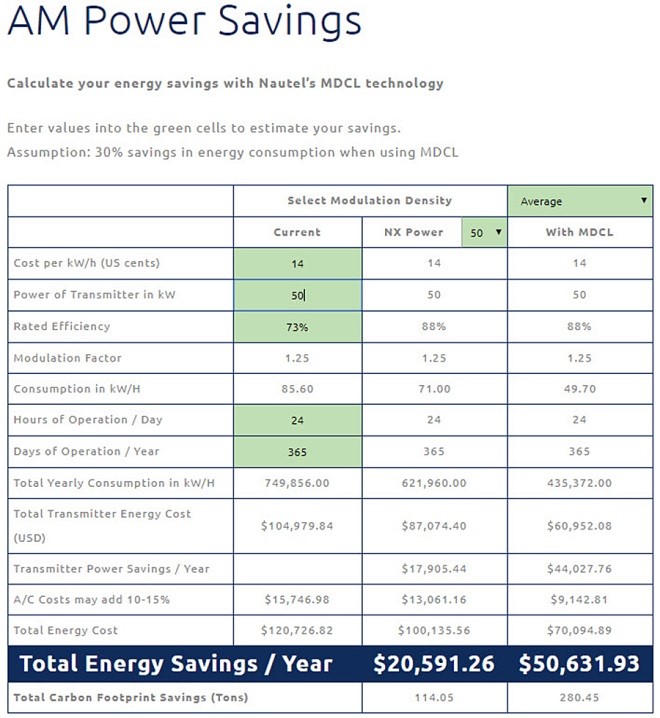