Success with VS Series Exciters

Fred Francis, a contract engineer, sent in this story about a customer’s experience with Nautel VS300 and VS1 as exciters.

Summit Media station WDBS The Boss 97.1 had an Energy Onix ECO-20 with a Stealth exciter installed. That exciter, which had sounded decent, became problematic with intermittent power problems and was sent back to the factory twice.

On its third failure I suggested to the station owner that he purchase a Nautel VS300 to use as an exciter. This way, if the main transmitter failed, the VS300 could be used as the on-air transmitter in a pinch, which happened several times.

“Summit Media is a very happy Nautel customer. The other stations in their markets are baffled by WDBS’s, WVBD’s and WKQV’s loudness and quality of audio.”– Fred Francis, Contract Engineer

The switching of exciters to the VS300 was relatively painless. I had to change a relay contact to invert the mute line on the Energy-Onix transmitter so that it would un-mute the VS300 when exciter power was needed and the station was on the air.

The VS300 sounded great and with the nearly transparent composite clipper turned on it was LOUD and the audio quality was much improved. The station was so loud in fact, the station owner did not believe he was legal and asked me to prove to him that the modulation was where it needed to be. So, I took a video of the modulation monitor to show him and he was quite surprised. 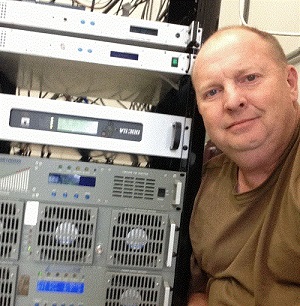 The Optimod 8200 only required very small changes to reduce the high end. The station owner liked the way the VS300 sounded; so much so that he purchased a VS1 for another station, WVBD, to replace a PTEK transmitter that had never sounded quite right. WVBD is using an Optimod 8100XT and is easily the loudest and best sounding station in the market.

When the Energy Onix at WDBS gave out for the last time after just 10 years of service and many major outages, the station purchased a Nautel NV20 transmitter freeing up the VS300 exciter for other uses. Now the VS300 is running at another station, WKQV as the exciter and back up transmitter for an Armstrong FM2500B.

“Coincidentally, that station’s slogan has always been “We Rock WV Louder” and now thanks to the VS300 they actually do!”

One additional item to note is that when each of these Nautel units was installed, a slight coverage increase was noticed along with the incredible increase in loudness and audio quality. Summit Media is a very happy Nautel customer. The other stations in their markets are baffled by WDBS’s, WVBD’s and WKQV’s loudness and quality of audio.

Both the VS300 and VS1 units have been rock solid in their performance. With the built-in AUI interface they are also easy to manage now that the stations have IP connectivity to all their sites. It is very easy to manage one of these units and see at a glance if anything is wrong – simple enough for a station owner to do it, but also intuitive enough for an engineer to get to the root of the system.