Located off the northwestern corner of San Juan County, WA, is Orcas Island, the largest of the San Juan Islands. Most of this beautiful, horseshoe-shaped island’s 57 square miles are rural and hilly. During April, 2014, KWPZ installed the first Nautel GV40 transmitter on Mount Constitution, near the island’s highest point at 2,409 feet, high above Puget Sound.

Because the transmitter was the first GV40 built (serial number H0101), it was shipped to Orcas Island direct from the exhibition floor of NAB 2014. Station personnel, Tim Vik and I (Bryan Hubert) then spent a couple of 15-hour days unpacking and installing the transmitter. A lot of that time was spent getting to and from the transmitter site on board a Washington State Ferry, part the United States’ largest ferry system.

The 3-phase wiring that powered the previous transmitter was the correct size for powering the new GV40 and luckily turned out to be just long enough to reach the new transmitter. Tim was really impressed with the GV40 AUI. It was his first time to play with the AUI and quickly figured it out how to review alarms and set up presets. After wiring up the control and metering wiring, connecting up the 3” coax output, setting the IP numbers, and feeding AC to the UPS option that feeds the controller and exciter the transmitter was ready to go. Mt Constitution Sites engineer, Erling, commented on the improved layout changes of the new GV 40 compared to the NV20 (KAFE) and NV30 (KISM), located in a different facility on Mt Constitution.

The transmitter was certainly packed with love. We could feel it as we tore the walls off the crate. 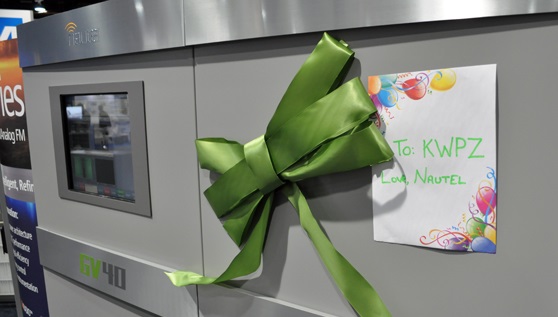 One thing we underestimated with the installation was the power needed to run the controller/exciter. When we first tried to turn on the transmitter it tripped the 1 kva UPS unit that also powered an adjacent equipment rack, knocking the station off the air for a couple minutes. That’s when we discovered that the UPS option, not only feeds the controller, but also the power supplies that power the 2 exciters (we ordered the standby exciter option) which can draw up to 14 amps when powering up the transmitter and 9 amps when running normally. Putting the transmitter on the air was delayed until we acquired a new Staco 2 kva UPS, dedicated to the GV40. The exciter output can actually put out 500 watts of RF, feeding the output modules directly, eliminating the IPA normally found in transmitters. This accounted for the extra power needed to run it. 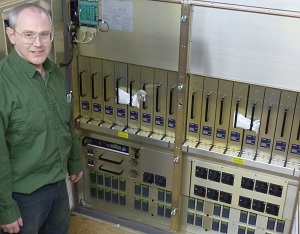 We are still playing with settings in ‘Power Boost’ and ‘Optimizer’ to see what trade off’s in reception we observe. So far it looks like going with the ‘high efficiency’ mode has little impact on my car radio when listening 65 miles from the transmitter site. I think we will be experimenting with this for a while longer.

There are a number of cool features in the AUI which we haven’t implemented just yet but contemplating, like ability to control other equipment with the extra GPO outputs. Our present remote control is not set up for logging and we’re contemplating using the ‘Call Home’ feature that uses servers at Nautel to do the logging. 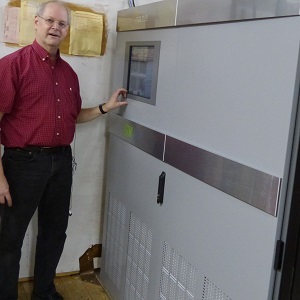 All in all, this transmitter is really cool. A big step forward for KWPZ and we’re confident, given Nautel’s reputation and experience with solid-state technology, that it will be more reliable than the previous transmitter. This GV40 transmitter is the 7th Nautel transmitter Crista Media has on the air with its 4 stations. We love these boxes.