Dirty to Clean at a Site to be Seen

This may be the most unusual transmitter site you’ve ever seen. It’s in the shower stall of what we believe is the former priest’s quarters of a local Catholic church. The area is now part of a church preschool. The station is KXMJ, a low-power FM radio station broadcasting at 94.3 MHz out of Marysville, CA. 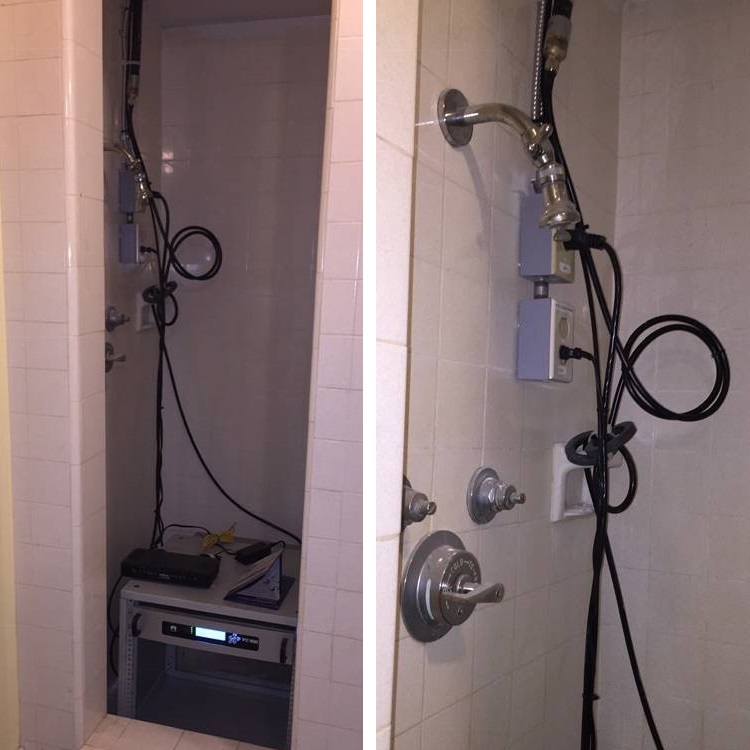 Fortunately, somebody had the foresight to remove the faucet handles. Frankly, I would have removed the shower-head as well. These pictures were taken in September 2015 when we installed a Barix Extremer 500 at both the studio and transmitter ends to overcome issues with unreliable digital audio via SHOUTcast. 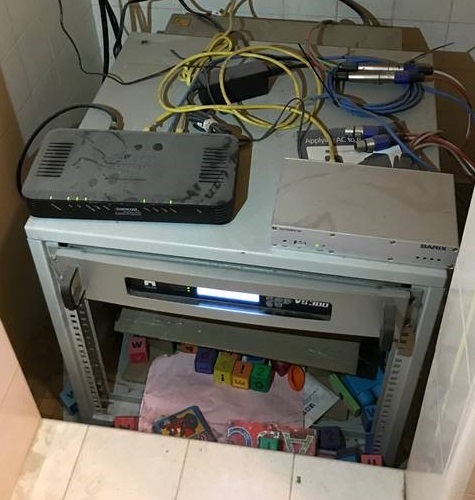 This photo was taken early November 2019 when we took the station silent. Note the children’s toys and the dirt, oh the dirt. It had had zero engineering attention since it was installed four years earlier. The before and after shots detailed in this report show just how dirty it was.

At this point I got in touch with Nautel for their help. Nautel Customer Service Technician, Brendan Tipney, helped us get back into the transmitter, which had been reset by a previous user in such a way that we no longer had access – the default Nautel user had been password-protected.

It took several attempts with different computer platforms and terminal software and about 90 minutes to hit the right one so he could tunnel in from the East Coast and restore defaults. This was a great customer service experience on our end as I switched from my Mac laptop to a PC laptop and ultimately that combined with ‘Putty’ enabled Brendan to get the job done.

“Brendan was nonplussed and patient both with me and the circumstances. He was determined to ‘get in’ and get the job done, which he did. An unexpected bonus was that he also upgraded the firmware for us at the same time.”

Since the transmitter was in my garage at the time, without Internet access, this was all taking place through a Netgear M1/MR – 1100 cellular router with ethernet connection. We hooked that up to the Nautel VS300LP and were able to easily access the Nautel AUI from the Mac or PC. I’m going to try running audio through that set up, just to see if that’s a potential back up to Comcast Internet service.

Next, I downloaded the logs and set up some new users/passwords. Then with all that out of the way, I pulled the air intake filters and popped the lid to ultimately replace the battery and give it a good cleaning.

It was — after four years without attention — DEFINITELY in need!

After consulting with Brendan about my proposed tools and methods, I felt a lot more confident that we’d be able to get the job done without creating problems. I didn’t want to just ‘move the dust around’ nor did I want to do anything that would create a static electricity situation and zap something.

At this time it was great to discover Jeff Welton’s tip about grounding the plastic vacuum hose to the transmitter. It’s Tip #34 in his 50 Tips ‘n Tricks for Nautel’s 50th! …”take a three or four foot piece of 14AWG stranded wire, strip about six inches of insulation from one end, wrap it near the suction end of the vacuum hose and tape it in place, then connect the other end to the transmitter chassis.” 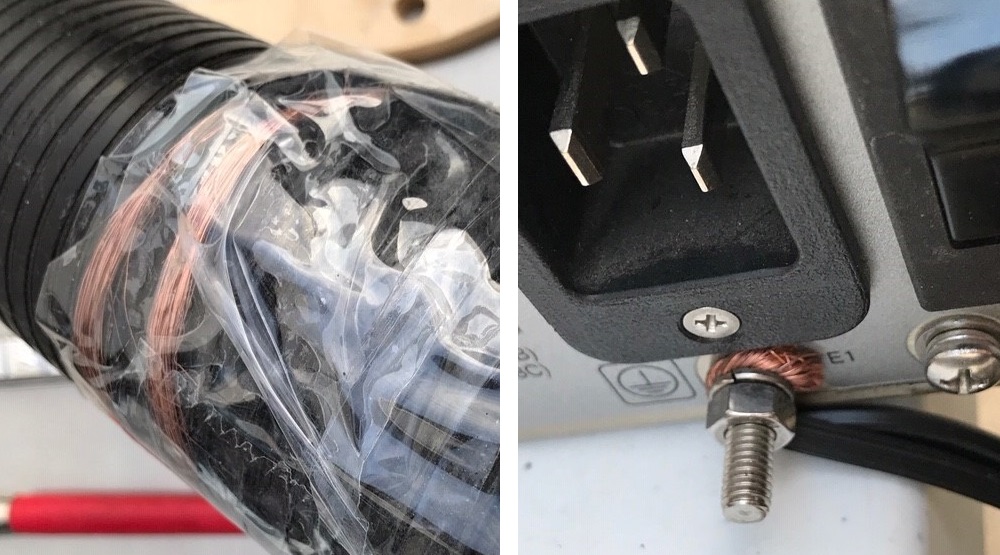 I would brush, brush, brush and suck, suck, suck with the vacuum and find that I’d brush somewhere again and there was more of this fine, caked dirt coming out of various places.

So, we cleaned everywhere with several different brushes, brush size improving accessibility and making a difference in what we could get to and where. Here’s the array of brushes; the 1.5′ and 0.5′ were used. 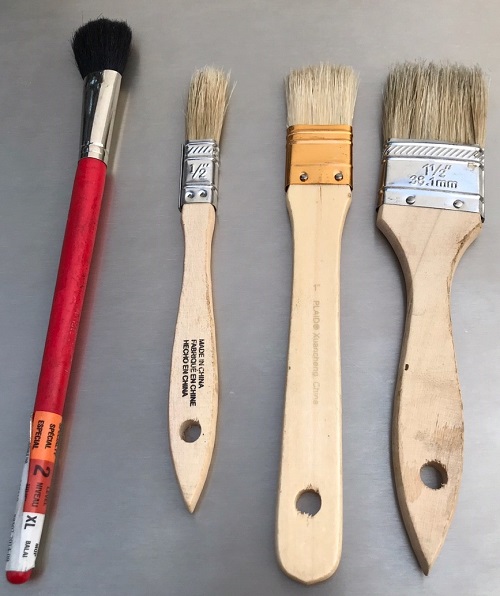 This BEFORE photo shows a good example of what the inside looked like. 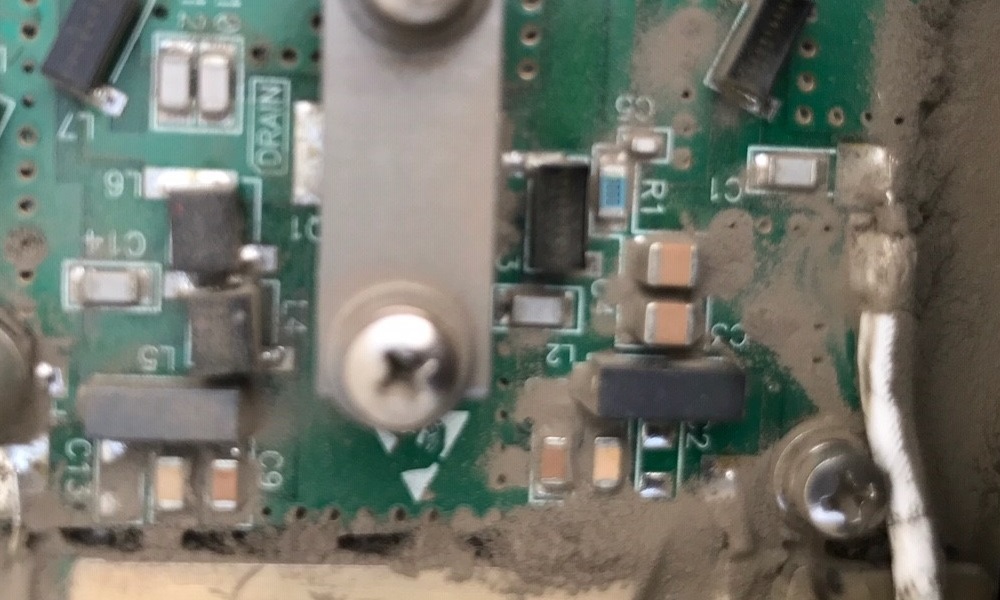 And here’s the same board AFTER a round of cleaning. Looking at this pic, I can see some spots that need more attention down at the bottom of the picture, where the terminals “B” and “C” are located. There’s still built-up dust on the left side of the terminals. 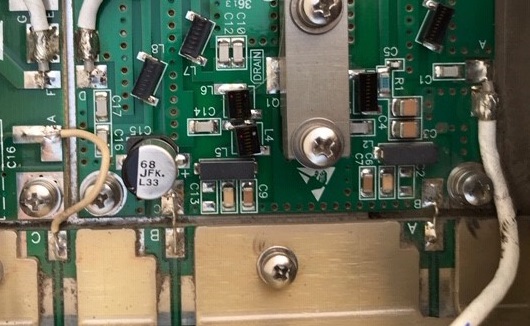 Getting under the Orban Audio Processing daughter card was fun. I first thought I might try removing the daughter card but then thought better of it because it was going to be a bit of a problem easily getting it off the standoffs. I pulled out the original power supply which had become kind of a dust magnet.

Here’s the front, which pulls in air through the filter/vent on the left front side of the transmitter.

Here is the control card and the Orban Audio Processing daughter card on top after cleaning. We had better access without the power supply in place. 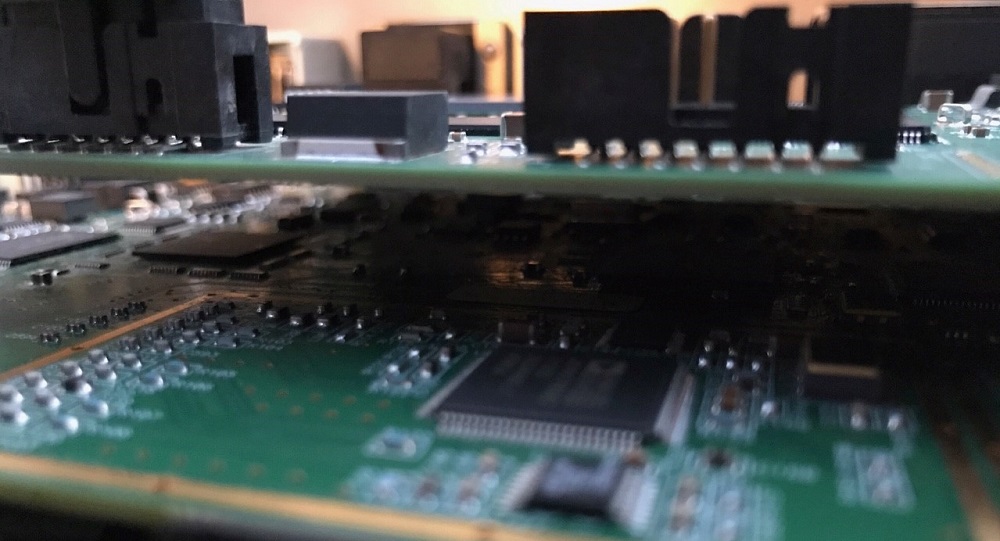 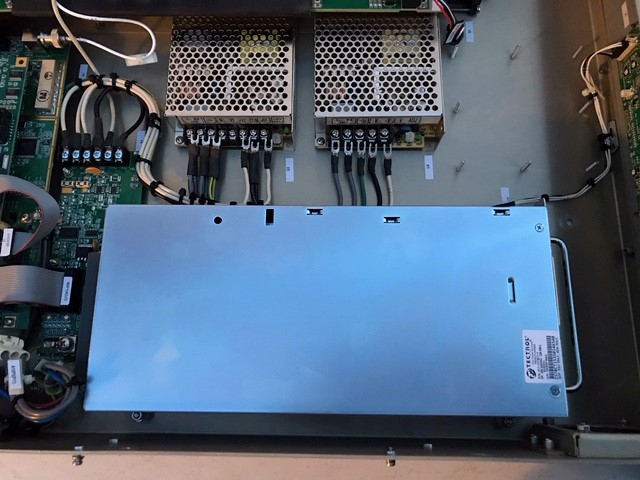 We discovered you needed to tilt the power supply cover a little bit in order for it to clear the front panel circuit card. 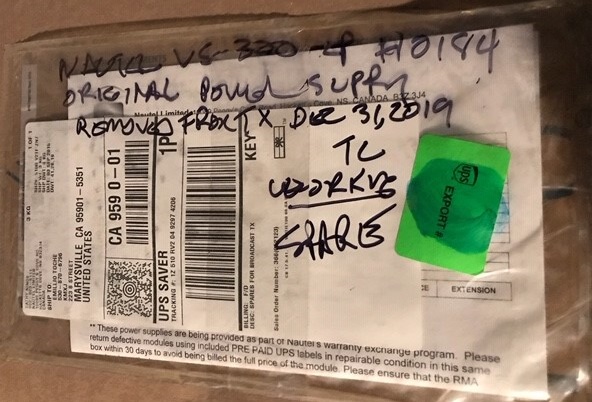 Next steps were to apply power, check for operation, change the settings backup battery and replace the air filters.

The transmitter came up as expected. I changed the 3-volt settings backup battery on the controller card and measured the old one. It still had life… 2.9 volts which is a pleasant surprise if this is the one shipped from the factory! Nautel recommends changing it once a year, along with the air filters.

We couldn’t easily find the original filter material used and also thought it didn’t do a great job of keeping the kind of dust we saw inside the transmitter out of the transmitter, but of course it had been unattended for 4 1/2 years! Lowes had packets of 4″ x 12″ electrostatic filters for use on the duct side of HVAC floor vents. I marked and cut a sheet to size (five filters per sheet) and placed the filters. They are denser than the old ones and should block more fine particulate matter. 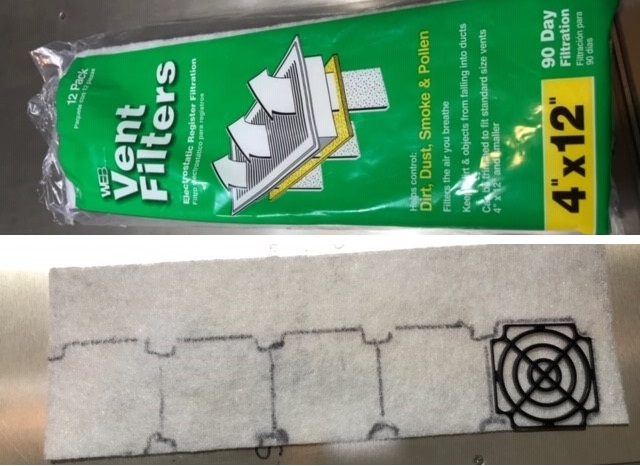 It should be noted however, given the denser material that I’m not sure whether airflow will negatively affect cooling. I plan to send a sheet to the Nautel factory and ask them to test. The filters fit just fine.

I discovered that there is a small ridge on opposite sides of the plastic filter frame that the filter retainer snaps behind. Until I discovered that, it was difficult to get the retainers to stay in place. I mention it here in case you should need to replace the filters. The retainer snapped into place and the top was put on. I cut a dozen more filters so we can change them monthly for the next six months without hassle. After buttoning up the transmitter, the next steps were to apply audio using Audacity software to loop a 1KHz tone, played out through the Focusrite converter. We were glad to see the expected reactions on meters and displays. Lastly, we labeled the front panel with the make, WRONG model and serial number of the transmitter for easy reference and noted that it had been cleaned and battery replaced on Dec. 31, 2019 by TL. I was very happy to report that 2019 ended with a CLEAN transmitter!

The basic “cleaned transmitter, replaced settings battery, tested for audio” information will go into the KXMJ-LP transmitter log, as required by the FCC. It has not yet been reinstalled as KXMJ-LP is on a Stay Silent STA for another month or so while a license transfer is arranged. I’m looking forward to acquiring a dummy load so I can work with the onboard Orban Optimod 5500 processor and hear what different settings do before we return the transmitter to service.

I’m looking forward to the new Flash-free HTML5 AUI which will allow monitoring and control of the transmitter from my iPhone or iPad. Since the demise of the “Puffin” web browser that translated Flash into HTML, it has not been possible to do that. I suspect there are hundreds of other customers and engineers that will be most appreciative of the new AUI.

As a user of a variety of radio and television broadcast tools and even ordinary hand tools, I appreciate good equipment. It makes the job easy and pleasurable. All of which contributes to a happy experience, rather than grumbling about having to figure out workarounds, or be less than satisfied with the user experience or the end results.

I’m not alone in thinking Nautel is at the top of the heap when it comes to transmitters.

“For LPFM stations — which often have little or no engineering available – Nautel has come up with a winner. The VS300LP is easy to work with, produces high-quality results, and is intended for long-term operation even in some challenging conditions. Like little or no maintenance for four years at a time!”

Broadcaster John Cameron Swayze and his line from Timex watch commercials comes to mind, ‘Takes a licking and keeps on ticking.’