With the recent installation of a new Nautel GV15 FM IBOC transmitter, WAWZ(FM) in Zarephath, N.J., finally has both feet firmly planted in the 21st Century. And while the install went smoothly, it wasn’t without a fair amount of fancy footwork.

“After a month on the Nautel, our electric bill for the site is about 30 percent less than the previous month.”– Ron Habegger, Chief Engineer

WAWZ’s General Manager Scott Taylor said, “Nautel’s reputation precedes them, but after doing the research it was the reliability and efficiency that sold the day.”

Chief Engineer Ron Habegger echoed that sentiment and added, “It has much higher efficiency in hybrid FM mode than we were accustomed to. And built-in asymmetrical HD capability, ready to go with a finger tap on the UI screen, is something WAWZ will be taking advantage of in the near future.”

Another feature that got our attention is the ability of the GV15’s exciter to accept the MPX output of our Orban 8600 processor directly via AES/EBU digital format.

Installation of something this critical obviously takes careful planning. Ron and I, with the help of our longtime electrician Bob Fernandez, had to plan out some rerouting of the utility wiring to ensure the GV15 would have proper UPS protection and generator backup. This also affected power to our FMi-1405, which would become our backup, and we had to carefully choreograph switching to the old Gates one last time before it would be decommissioned.

The GV15 would then occupy the same space in our small building as the Gates once the latter was moved out. This was no mean feat. Even though the GV15 is smaller than the Gates, it’s much heavier. With little room to maneuver dollies or hand trucks, we resorted to using sections of 2-inch steel pipe as rollers. (Hey, if it worked for the ancient Egyptians …) The Gates was placed in an adjoining building on the site, where it will likely reside as a museum piece of sorts. She doesn’t owe us a dime! 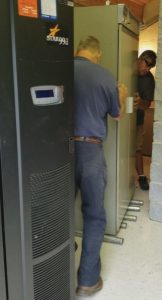 Once it landed in its new home, the GV15 was a breeze to install. Thankfully, Ron had all the plumbing in place ahead of time, having spent the previous months reworking much of it to allow us to switch seamlessly either the GV15 or the FMi-1405 between our main and backup antennas or dummy load.

This was a long-overdue improvement to our facility in general. Previously, just having one coax switch meant we could only switch our main or backup transmitter to either our main or backup antenna. Using the dummy load meant disconnecting the 4-inch coaxial line from the backup antenna to connect the dummy load line. Ron’s addition of a second switch now allows us to keep everything “hard-wired.”

Once the UPS-conditioned power and RF output line were connected, we brought the GV15 to life. The first thing we noticed was how quiet this transmitter is. Because of the noise in the room from the air conditioning and other equipment, Ron had to put his ear to the cabinet to confirm to himself that it was actually running.

Although we had spent several weeks studying the manuals, it was still a testament to good design that the touchscreen interface was intuitive enough that we were able to configure all but the IBOC parameters without having the manuals in our laps.

Getting IBOC to behave was a bit of a head scratcher, even with the manual, but this turned out to be self-inflicted. Just when we were about to give up and call Nautel tech support, we traced the issue to a faulty connector on a Cat-5 cable. (Ron must have crimped that one! Cough, cough …)

Speaking of tech support, a key feature of the Nautel GV15 interface is “Phone Home.” Once the transmitter’s onboard computer was connected to the internet, this feature allows it to contact the factory automatically. This lets Nautel know, first, “I’m here! I’m up and running!” It also allows factory technicians to more effectively troubleshoot should we find ourselves in over our heads. 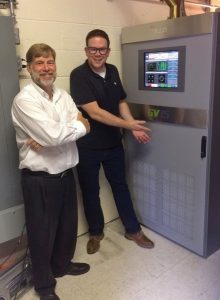 The GUI is presented on a fairly large screen, especially compared to those on our audio processors. The graphics are large and easy to read, without the fear of sausage fingers like mine inadvertently breaking things. It’s also easily customizable. We were quickly able to customize it to a way that made sense to us without even a peek at the documentation.

In addition to running much quieter than our older transmitters, it also runs much cooler. We have three five-ton-capacity air conditioners servicing the building. One usually runs all the time, while the second kicks on as needed to supplement. The third is a backup.

We soon found this arrangement kept the building too cold for comfort. Dialing back the unnecessary cooling has brought the noise level down even further. Time will tell just how much of an impact this has on our electric bill.

Ron says, “After a month on the Nautel, our electric bill for the site is about 30 percent less than the previous month.”

As we enjoy the “new transmitter smell” of the Nautel GV15, we’re looking forward to many years of efficient, economical operation, with the added plus of being able to keep all three HD Radio channels alive regardless of which transmitter we operate.

Again, Scott Taylor, “We’re confident in our ability to serve our large and loyal NYC metro audience for years to come.”