Thumbs Up for Emergency NX25

729 kHz 25 kW Medium Wave Replacement Gets Thumbs Up from Sentech!

Radio Telecommunication Services (a subsidiary of LS of South Africa who is Nautel’s Southern African representative) was approached by Sentech, urgently requiring assistance to replace a 25 kW Harris DX2 (medium wave transmitter) that had been damaged by fire and soot, at their Klipheuwel transmitter facility (located approximately 100km from the City Centre of Cape Town). The transmitter had been in service for almost 20 years – the sustained damage made it uneconomical to repair the equipment that had also reached the end of its design service life – it was elected by Sentech that the transmitter be replaced.

“The new NX25 and service we’ve received from RTS, has certainly met with the expectations of my team.”
– Mr Mbongeni Mofokeng, Sentech Manager 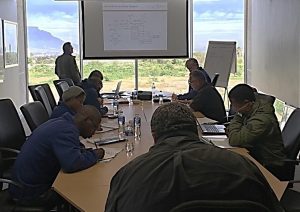 The Sentech team undergoing classroom training before installation of the new transmitter.

Sentech SOC Limited’s technical staff had previously visited the 25 kW containerized transmission facility which LSSA had prepared for Magic 828, in mid-2015 and were impressed with the design features and overall compactness of the Nautel NX25 (which was supplied and installed by LSSA), along with the future long-term support as demonstrated by Nautel as a manufacturer. It was on this basis that a turnkey project was awarded to RTS where the new NX25 transmitter was to be procured from Nautel, along with arranging for local delivery, unpacking and installation with the Sentech team. A comprehensive training course on the NX25 was also provided to the staff, prior to the installation.

Sentech arranged a temporary loan 25 kW transmitter from the Pulpit Media Group (obtained from the previous DRM trial that had been underway in Pretoria/Johannesburg), which was duly re-tuned and installed for the interim period up to the new Nautel NX25 TX installation. 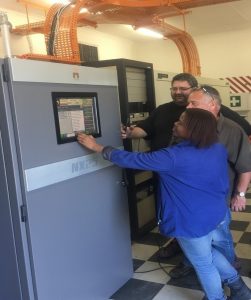 Rolf Le Roux, Ernst Heydenrych and Ncomeka Makhamba from Sentech’s Cape Town Operational Centre put the NX25 through its paces during the on-site commissioning at Klipheuwel.

Needless to say – the pressure was to deliver the new transmitter, which Nautel was able to manufacture at its Bangor-Maine (USA) production facility within three weeks (from date of purchase order) and then air-freighted to South Africa. Vaughan Taylor took the lead for the entire project, leading to the successful installation and commissioning of the new transmitter in just over a month from date of the customer placing the order on LSSA – a considerable ‘milestone’ in that this transmitter was the first purchase by Sentech from Nautel in over 20 years!

Says Mr Mbongeni Mofokeng, (Sentech Manager, Cape Town Operations), “Thank you RTS for your efforts – the new NX25 and service we’ve received from RTS, has certainly met with the expectations of my team and ultimately our client, being Cape Pulpit.”