And brings it into the future of radio with AM HD Radio.

Sun Radio is a community-funded organization operating 11 noncommercial solar-powered radio stations (soon to be 13) in the Austin and San Antonio areas. We are also online with more than 132,000 weekly listeners all over the world, of which over 35,000 use the Sun Radio smartphone app and/or smart speakers.

Our primary mission is to save community radio, and our secondary focus is on being environmentally friendly in the process. There have been a lot of noncommercial stations in the San Antonio and Austin areas over the years, and with the exception of the two 50,000 watt FMs we are implementing this year, every one of the radio stations in our group was either off the air or slated for destruction at the time of our acquisition. All have been saved for the communities we serve.

Our mission also involves supporting the Austin music culture and supporting Texas artists. In addition, our operation is friendly to the environment by relying on solar power, hence the name Sun Radio. The San Antonio and Austin areas are among the fastest growing in the country, and we wanted to give these communities a real local voice without the burden of long commercial stop sets. 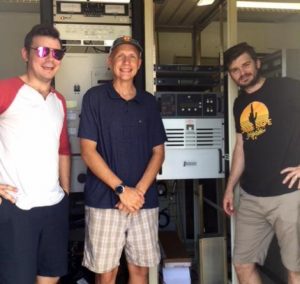 We’re really excited about our first AM station, KTSN 1490 in Austin. It was originally called KNOW and was put on the air in the 1920s. This was Austin’s first radio station and one of the first stations in Texas. When Sun Radio acquired KTSN, it was on the air but using an old 1 kW transmitter, limping along at about 60–70 percent power. Our first goal was to replace the transmitter with something modern, so we talked with Nautel at the NAB Show in Las Vegas to see what was available. Both Nautel and Xperi suggested we try an HD Radio-enabled transmitter.

“When our new Nautel J1000 arrived, we couldn’t believe its size — it’s about the size of a microwave, a huge contrast to our old transmitter, which occupied pretty much the entire transmitter building.”

Our engineers established a plan to get the Nautel ready to go on-air, and then quickly remove enough of the old transmitter to get the J1000 in place and on the air. This was accomplished with only four to five hours of down time, and we were back to our full licensed power!

Our next step was to implement the HD part of our signal. For this, we deferred to Nautel and their expertise. This part went very smoothly and with Nautel’s assistance, we got the J1000 fully set up and working correctly with our Inovonics processor.

When the HD Radio signal was first turned on, it took a few seconds to lock in — and our reaction was “Holy cow!” Our AM station sounds great in analog mode, and in HD it sounds like beautiful stereo. It’s great for our music format featuring local artists!

I was thrilled, and when Cole McClellan, our AM engineer, gets excited, you know it’s good. After our set-up and tuning process, McClellan said “I’ve never heard AM sound like that.”

Now that we have KTSN on the air with an amazing sound, we’re moving on to our next challenge.

We don’t own the land it’s on — we are just leasing it for now. We are working on getting historical protection for the station since it’s been there for about 90 years, but for now, the plan is to locate a new piece of land that meets our license requirements. We have seven years to get this done, and it’s going to be a challenge because our licensed coverage area is so small.

Once we have found a new spot for our transmitter, we’ll convert it to solar operation like our other properties. Our ultimate goal for KTSN(AM/HD) is to continue our focus on community based radio and for KTSN to be our flagship network station, feeding both our owned and operated translators via analog and HD Radio and to affiliated noncommercial stations soon to be fed off satellite. It will be a 100-percent solar-powered noncommercial network anchored by an AM built in the 1920s and an AM HD built in 2018.