New collaborative webinar series kicks off August 13, focusing on the future of radio transmission that leverages existing Made for Radio standards and technologies. 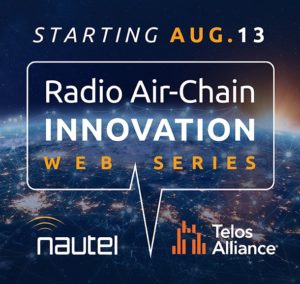 “We have put together a series of informative and provocative webinars that will demonstrate some new approaches to the radio air-chain,” says Kevin Rodgers, Nautel President and CEO. “Each webinar builds on the content of the preceding webinar; you’ll want to sign up for all three sessions to learn more about new, disruptive technologies resulting from the companies’ collaboration.”

“Nautel and Telos Alliance have collaborated numerous times in the past, and we have an affinity for each other, both technologically and philosophically,” says Frank Foti, Executive Chairman of Telos Alliance and Founder of Omnia. “We’re very excited about this joint effort.”

Hosted by both Nautel and Telos Alliance, the first webinar on August 13 will introduce the Radio Air-Chain Innovation Collaborative, review some key “Made for Radio” standards, and show new capabilities that are applicable to HD deployments today. The companies will also provide a review of key industry standards that are being used as a basis for the technological advancements.

Webinars #2 and #3 on August 27 and September 10 will feature live demonstrations of new, disruptive technologies resulting from the collaboration between Nautel and Telos Alliance.

To sign up for Radio Air-Chain Innovation webinars, visit https://www.nautel.com/resources/webinars/.

About Nautel
Nautel is one of the world’s largest manufacturers of AM and FM radio broadcast transmitters. Focused on making transmission worry-free for users worldwide, Nautel provides valuable new solutions for digital radio broadcasting at stations of all sizes. All Nautel transmitters employ advanced control, monitoring and instrumentation tools which simplify management of transmitter sites, both locally and remotely via Web access. More than 16,000 Nautel transmitters have been deployed in over 177 countries since 1970.

About Telos Alliance
Telos Alliance is a global leader in audio, trusted by the biggest names in the media landscape. Telos Alliance’s exclusive focus is to deliver innovative, intuitive solutions that inspire the creation of the most exciting and engaging audio experiences imaginable. No audio challenge is too big; no technology is beyond reach; no solution, large or small, is unobtainable. The Telos Alliance portfolio of brands includes Axia® Audio, Linear Acoustic®, Minnetonka Audio®, Omnia® Audio, Telos Alliance®, Telos Infinity®, Telos® Systems, and 25-Seven® Systems. Headquartered in Cleveland, Ohio, USA, with additional offices and dealers around the world, the Telos Alliance supports the diverse needs of audio professionals around the world with best-in-class support 24/7.