Another AM radio station in the United States has converted to all-digital broadcast operations. WSRO(AM) turned off its analog signal in early December and is now broadcasting jazz music in all-digital AM covering the western suburbs of Boston.

The radio station is licensed to Ashland, Mass., and owned by Langer Broadcasting Group. The geographic area considered part of the MetroWest region of Greater Boston and located about a half-hour west of the city.

According to a post by station representatives on a Boston area radio message board: “WSRO Ashland, Mass. is on the air in the digital-only MA-3 mode of HD Radio. The transition occurred about 3:30 p.m. this afternoon (December 1).”

The station, which promoted the switch to all-digital AM on-air, asked for reception reports from listeners in its online post.

The FCC confirmed the station turned off it analog signal on Dec. 1 and can no longer heard on analog radio receivers. The station at 650 kHz is directional and drops from 1.5 kW daytime to 100 watts at night.

WSRO programming is simulcast on FM translator 102.1 MHz in Framingham, Mass. It also simulcasts in analog on 1410 (AM) and 98.1 (FM), according to those familiar with the most recent developments.

Attempts to reach representatives of WSRO for comment on the transition and listener response were unsuccessful. 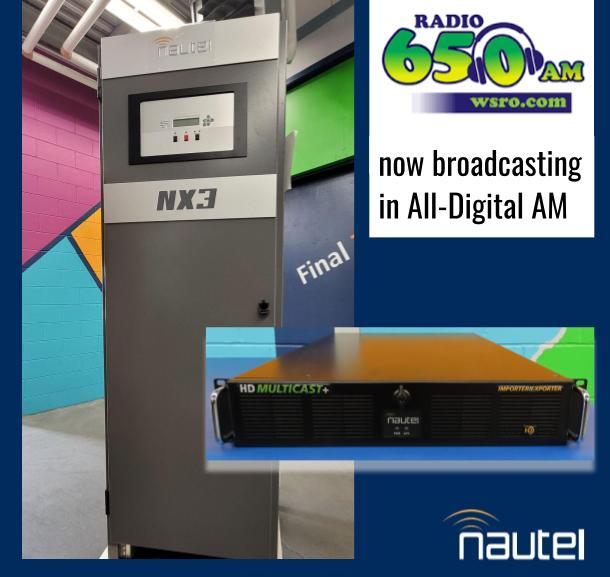 WSRO was silent from July 9, 2020, through Oct.27, 2020, to reorganize its finances, according to the FCC database. The station broadcast a Brazilian music format until it switched to jazz earlier this year.

In addition, several other AM licensees have notified the FCC of their intentions to go all-digital only.

Read this article in RadioWorld >