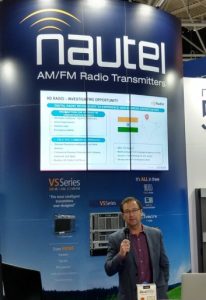 “We worked with Nautel to get the authorization required to install a test station in Delhi,” D’Angelo said. “We expect to start on-air trialing within a couple of weeks and continue into next year.”

The FM station will broadcast an HD Radio multicast hosting up to four HD signals. According to D’Angelo, in India there is a remarkable interest in second- and third-language programming, mainly due to the large number of languages spoken throughout the country.

The HD Radio test will demonstrate the entire feature set of the digital radio standard, such as dynamic visual content, station logos and emergency alerts services.

“We will run the trial using standard broadcast equipment from Nautel with the same configuration adopted in the United States, as well as with standard commercial receivers, including the first HD Radio-capable cellphone, named BeatBoy,” D’Angelo explained.

He added that many of the vehicles shipped to India are equipped with the same HD Radio receiver they feature in the U.S. So, even if it’s disabled by default, local dealers can easily activate it. This means thousands of vehicles will potentially be able to receive India’s first HD radio broadcasts once the service begins.