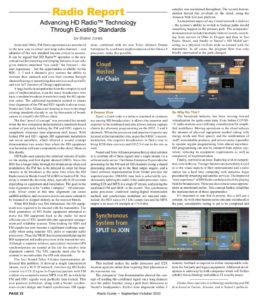 In the mid 1960s, FM Stereo operation was introduced as the new way to attract and keep radio listeners – and adoption of this new standard became critical to success. It can be argued that HD Radio™ operation is the new critical tool for attracting and keeping listeners; it not only gives stations important “eye candy” for listeners – the user experience – but the opportunities available via the HD1, 2, 3 and 4 channels give stations the ability to increase their outreach and even their revenue through channel leasing or monetizing data services such as traffic and new IoT applications.

A huge hurdle in adoption has been the complexity and cost of implementation, even for many broadcasters who have a modern broadcast transmitter ready for HD operation today. The additional equipment needed to ensure time alignment of the FM and HD1 signals is also an issue. Nautel and Telos Alliance are looking at ways to leverage existing standards already in use by thousands of broadcasters to simplify the HD air-chain.

The first “proof of concept” was presented last month when the two companies demonstrated a standards-based method of precisely locking the FM and HD1 signals to completely eliminate time alignment drift issues. With locked FM and HD1 signals HD equipment installation can occur anywhere, which allowed a second concept demonstration two weeks later where the HD equipment was hosted as software components in the cloud. More on this shortly.

HD Radio uses separate but identical streams of audio on the analog and first digital channel (HD1). Since the HD1 has a longer delay through the broadcast air chain and modulation, the FM has to be delayed in order for these streams to be broadcast at the same time when the HD Radio receiver blends from FM to HD1 or back to FM. This delay is termed the diversity delay, typically 8-10 seconds depending on equipment and installation. The goal in the time alignment is to be “within 3 samples” – 68 microseconds. Minor errors in this time alignment can create audible artifacts, and excessive errors can cause content to be repeated or skipped entirely as the receiver blends.

When HD Radio was first introduced the HD equipment was required to be located with the transmitter. The third generation of HD Radio equipment attempted to move the HD equipment back to the studio for most efficient use of STL bandwidth plus equipment management and reliability reasons. Time-locking the HD1 and FM signals has now become a significant challenge especially when using separate STL paths or separate audio processors. Thus, the NRSC has recommended placing the HD equipment and audio processor at the transmitter site. Although a superior solution, specialized receivers/GPS synchronization are needed at the site for reactive time alignment control. The STL capacity must also be increased to accommodate the HD side channels.

The first Nautel-Telos Alliance demonstration addressed this problem. It showed a single transmission stream, over a TCP/ IP network, interleaving HD Radio content via E2X (Exgine to Exporter) packets with FM content via composite stereo MPX over IP, in which the FM and HD1 signals were perfectly time-locked. This new protocol definition, along with a Nautel synchronous exciter design and Nautel synchronous HD equipment combined with the new Telos Alliance Omnia Enterprise 9s, a software implementation of the Omnia 9 processor make this possible.

Xperi’s Gen4 code is a defacto standard in common use among HD broadcasters; it allows the importer and exporter to be combined and also allows remote capture clients for alternate programming on the HD2, 3 and 4 channels. When the processor and importer/exporter are located at the transmitter site as per the NRSC’s recommendation, this requires broadcasters to find a way to bring RDS/data services and HD2/3/4 out to the site as well.

Nautel and Telos Alliance propose that an ideal solution is to combine all of these signals into a single stream via a software radio server. The Omnia Enterprise 9s provides the processing for the FM and all HD channels (using a shared processing structure up to the final output stages), and a Gen4 software implementation from Nautel provides the importer/exporter. FM/HD1 time lock is achieved by synchronously splitting the audio in the audio processor, transmitting E2X and MPX in a single IP stream, and joining the modulated FM and IBOC in the exciter. This synchronous audio processor, combined analog/digital transmission method, and synchronous modulator are rate-and ratio-locked; the HD1 uses a 44.1 kHz sample rate and the MPX output is an exact 4X multiple at 176.4 kHz.

This method makes the audio processor and E2X location-agnostic rather than requiring their placement at the transmitter site.

The companies’ first demonstration showed the concept of sending this combined signal via a long distance over the public internet, using a path from Minnesota to Nautel’s headquarters. Perfect time alignment within 3 samples was maintained throughout. The second demonstration hosted this air-chain on the cloud, using the Amazon Web Services platform.

An important aspect of any virtual network is failover – the system’s ability to switch to backup paths should something happen to the primary path. The companies’ demonstration included multiple failover events, switching from servers in Ohio to Oregon and then to Sao Paulo, Brazil, and finally to Nautel’s HD MultiCast+ acting as a physical resilient node co-located with the transmitter. In all cases, the program flow was only briefly interrupted as the path changed.

So Why Do This?

The broadcast industry has been moving toward virtualization for quite some time. Even before COVID-19, radio stations were utilizing virtualization for simplified workflows. Moving operations to the cloud reduces the amount of physical equipment needed (along with energy needs and floor space), and the combination of AoIP, networkable products, and servers make it possible to operate regular programming from almost anywhere. HD programming can also be initiated from almost anywhere, reducing its equipment requirements as well as complexity of implementation.

Finally, survival is an issue. Radio has a lot of competition, even in the car. Younger listeners are particularly keyed in to the visual aspects of their entertainment and a radio station has a hard time competing with attractive logos presented by streaming and satellite services. The improved “user experience” of HD Radio can help to level the playing field for broadcasters. There are also extra revenue opportunities as mentioned earlier. This concept further simplifies the implementation of these opportunities.

It’s important to note that at present, this is still just a concept. As with other transmission concepts introduced in the past, considerable testing is yet to be completed and industry feedback is required to define interoperable solutions for 3rd party and legacy equipment. Additional development is underway by both companies which will further solidify this technology and address IT security issues.