A New AUI is Coming to Town

When Nautel introduced the Advanced User Interface (AUI) 12 years ago, it revolutionized access to and management of Radio transmitters, both locally and remotely.

A certain amount of information and remote management of transmitters has been available to engineers for decades. Starting as early as the 1950s, remote readings and switching of transmitters were done through some sort of direct connection to the transmitter site. This was usually accomplished via dedicated phone lines with DC continuity and stepping relays at each end, then with audio signals at the studio that sent pulses to stepping relays at the transmitter. Digital readouts started appearing in the late 1970s, and binary-coded commands provided raise-lower functions, channel selection and so on.

This author was working at Gentner in the 1980s when the VRC-1000 was released. At the time, this product was revolutionary, allowing users to query certain functions and issue commands using DTMF tones, and to receive a verbal response via a synthesized voice, essentially controlling key transmitter functions from anywhere a touch-tone telephone existed. It was the first time that the words “remote transmitter control from anywhere” were used in the Radio market – but was not at all comprehensive by today’s terms.

As the Internet started gaining speed, companies looked to IP access for transmitter control, with better reporting and finer adjustments becoming possible. However, getting the information from the transmitter was often not straightforward and information was still not as comprehensive as users would like. A remote control would let you know if a fan had failed but could not let you know if the fan was showing signs of wear. It would tell you if a module had failed but not warn you of PA efficiency changes. Knowing what was really going on inside the transmitter was reserved for transmitter site visits, with engineers carrying a carload of external equipment to measure and collect all of the data they needed. 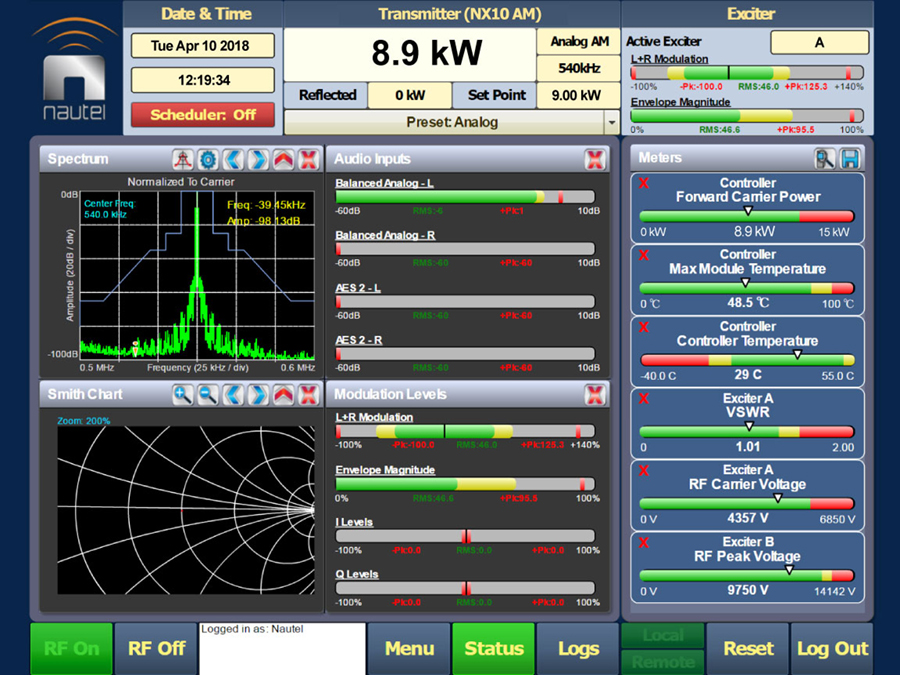 Nautel changed this with the AUI. In April 2008 two high-power transmitters, the NV40 (FM) and the NX50 (AM) were released. Each of these products included the new Advanced User Interface – incorporating a 17” color LCD touchscreen on the front panel, and remote Web access to all of the AUI’s display and control functions. This was a departure from other transmitters and control systems which did not provide comprehensive access, either locally or remotely.

“I recall one design meeting where our engineers were asking sales and marketing people what we wanted to access remotely,” says Nautel Head of Marketing John Whyte. “The answer was, ‘everything!’” 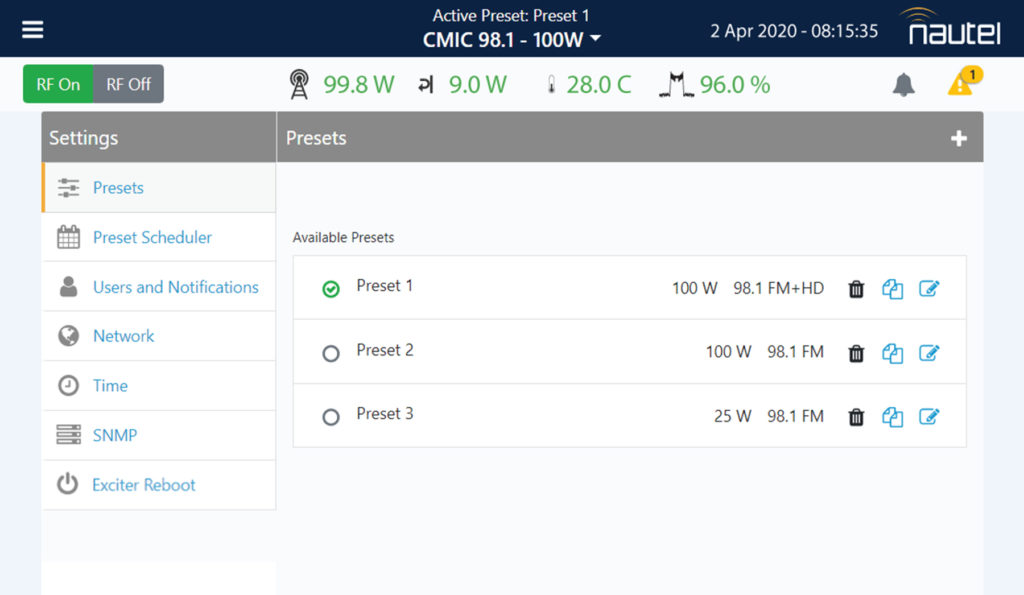 Attendees at the 2008 NAB were amazed by the breadth of information and control that were available through the AUI. Not only did it provide monitoring down to the individual module level and comprehensive logging, it included an instrument grade spectrum analyzer, and an IBOC modulation analyzer with constellation display. Alarm reporting and other requested information were made available via a tiered e-mail structure. 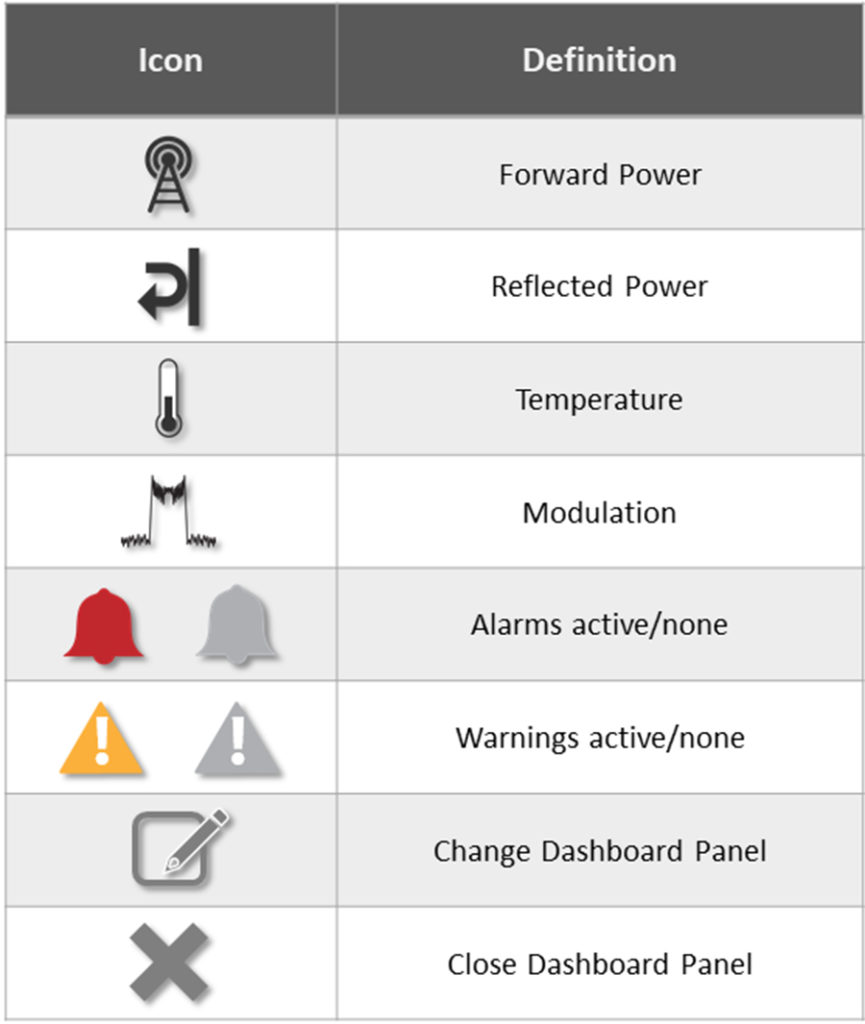 Over the past 12 years, the AUI has remained the industry standard for transmitter monitoring and control. It is now used in all modern Nautel transmitters; in models where the 17” screen is not available, the AUI works through a direct Ethernet connection. Its design has permitted the addition of new capabilities via firmware upgrades; its transmitter functionality, fully operable either locally or via a Web interface, now includes unique features such as optional onboard audio processing, direct digital inputs, asymmetrical sideband operation for HD Radio™ and audio storage/playback capability. As of 2020, more than 9,000 Nautel transmitters had been deployed using the Advanced User Interface.

There was a problem lurking in the Internet shadows, however: the original AUI operated using the Adobe Flash platform, which fell out of favor in the consumer market when security vulnerabilities were discovered as a potential risk for openly accessible applications. Unlike consumer devices, most Nautel transmitters reside behind firewalls and password protection is available (and strongly encouraged!), so the vulnerabilities of Flash were not a huge issue for Nautel transmitters themselves. All major browsers still support Flash – users can easily “allow” it when warned. However, in July 2017 Adobe decided they would no longer provide updates to the Flash browser plugin as of 31st Dec 2020. The browser vendors then said they would therefore drop all support for the Flash plugin as of the same date, as to do otherwise would put users at risk from the unsupported (i.e. unmaintained with security updates) Flash plugin. Nautel has been aware of this for several years and realized that this would become more of an issue with time.

The new Advanced User Interface which will shortly be released by Nautel is based on HTML5, a powerful Web application. HTML5 uses encryption for added security and can run on any browser – and it is platform agnostic. It is extended by frameworks and libraries that only recently have allowed it to compete with the richness of Flash. Other extensions can provide security and responsive design – the ability to look good on almost any device’s browser. Screens automatically re-size to display the AUI’s information, so it can be used on a desktop, laptop, tablet or smartphone. 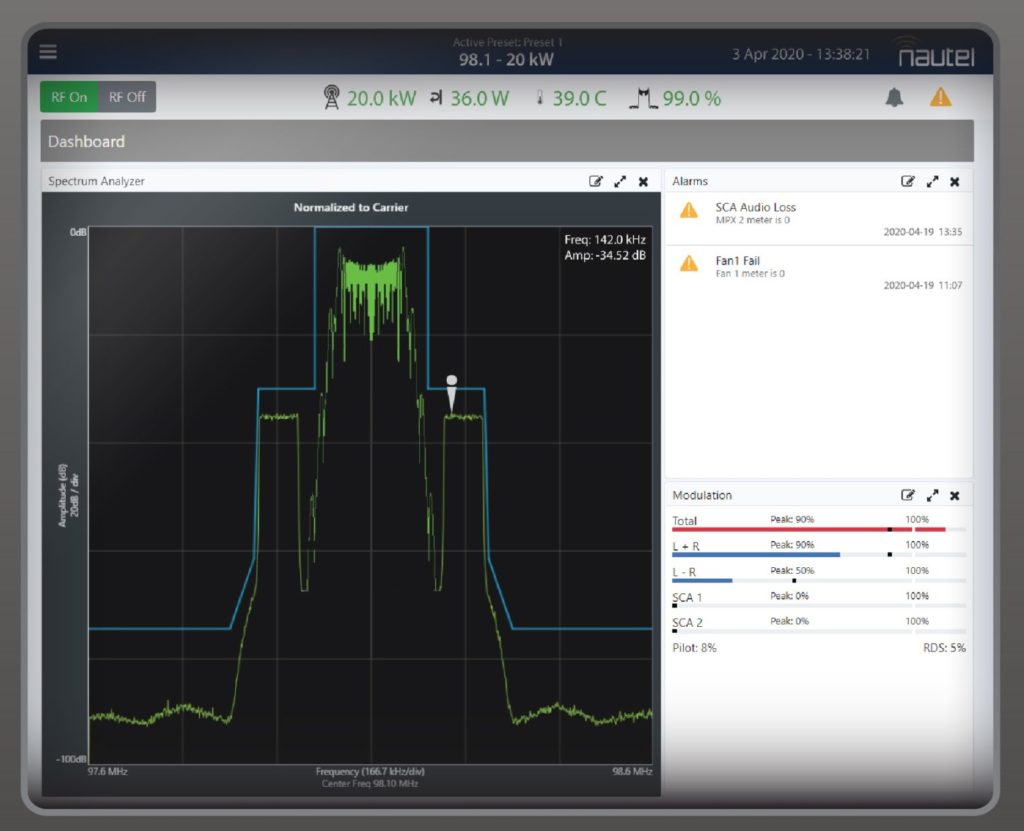 As with the current AUI, everything runs from the transmitter itself. To set it up, a user would connect through a firewall, then navigate to the appropriate HTML page that is posted from the transmitter. The AUI would then load on the user’s computer. Matt Herdon, a Product Manager at Nautel, says the new AUI is significantly smaller than the current one so the initial load should be much faster than before.

Herdon believes the new AUI will provide a more intuitive, natural user experience. The front panel/main page will have a similar appearance to the image shown on the front cover of this issue; as with the current version, multiple informational items are presented. The new version will show one graphical display at a time and alternate displays are easily accessed via pull-down menu choices. (The “home page” graphical display will show the spectrum analyzer). As with the current AUI, the current state of the transmitter always appears at the top of the screen no matter what other information is selected via the menus.

Multiple languages will be supported by the new AUI; different language sets are stored in a database and new language sets can be added.

While reinvented for HTML5, the new AUI retains familiar features such as remote I/O, scheduling, and presets.

Nautel had planned to unveil the HTML5 AUI at its [email protected] Technology Forum; with this event now indefinitely postponed, the AUI will be demonstrated via upcoming Nautel Webinars. Herdon also plans to collect a list of users who would like to act as beta test sites prior to the formal release of the AUI; interested parties should contact Nautel.